Here at WBR Mosquito Control, our mission is to protect the citizens of West Baton Rouge Parish from the threat of mosquito-borne disease and to combat nuisance mosquito problems to improve the quality of life for everyone in our community. To achieve our mission, we operate on an IMP (integrated pest management) basis, meaning that we employ multiple science-based principles to control mosquitoes. These principles include; mosquito surveillance, disease testing, larval mosquito control, adult mosquito control, source reduction, resistance testing, and public education. Below, are details on how we use these methods in our day-to-day operations. 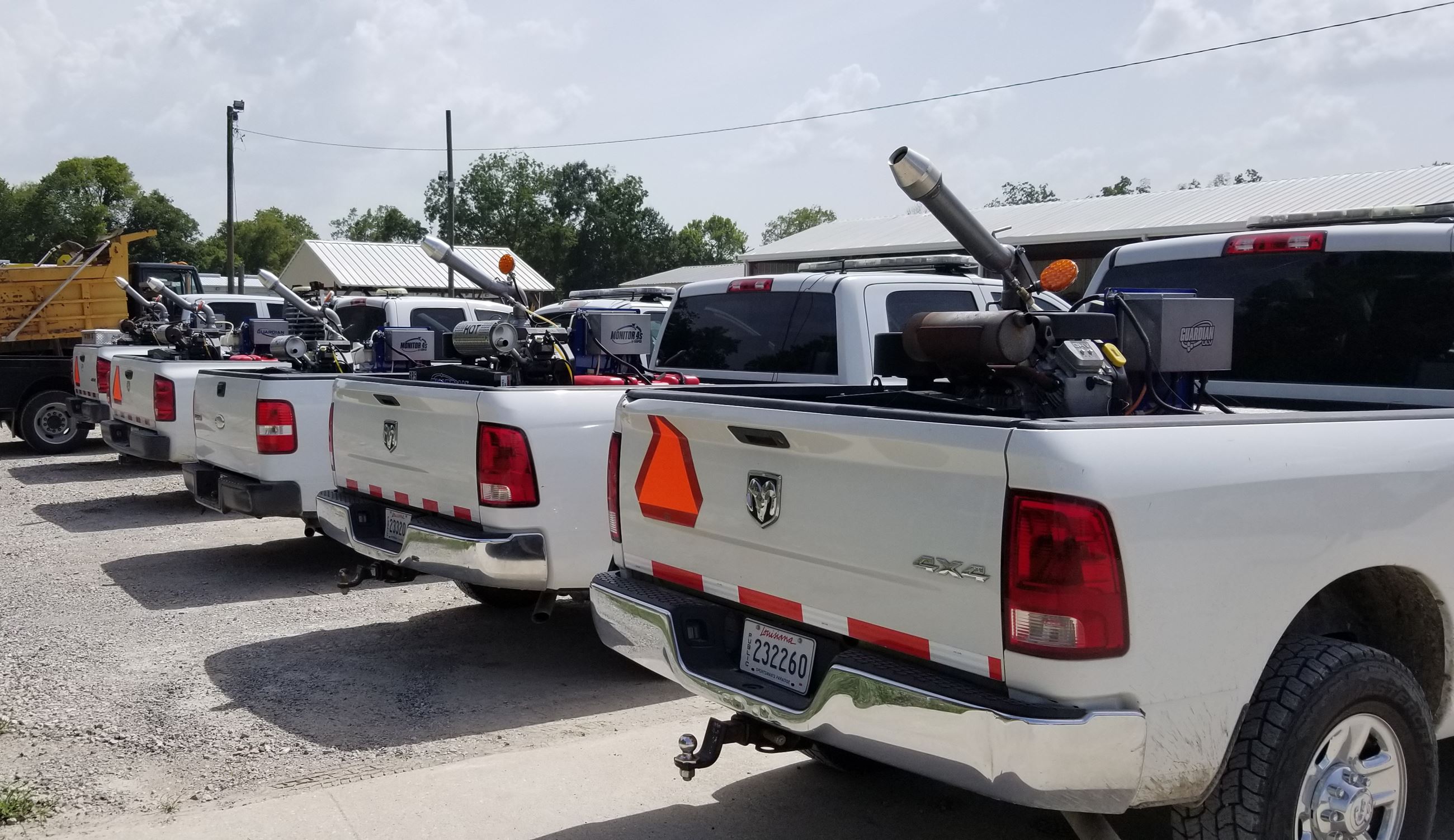 Ground-based Ultra-Low Volume (ULV) spray truck operations comprise the bulk of our pesticide-based tactics for the control of mosquitoes in WBR Parish. When and if we spray is based primarily upon the weekly results of our disease and mosquito population surveillance program.

The pesticide products we use in our spray trucks are primarily water-based pyrethroid-type adulticides. All of the products we use at WBR Mosquito Control are approved by the Environmental Protection Agency, The Louisiana Department of Agriculture and Forestry, and The Louisiana Department of Environmental Quality for the control of insect pests.

Our spray trucks are all outfitted with GPS tracking and computerized spray machine control technology. Our spray trucks are calibrated to spray from 2 to 20mph. The spray machine control will not allow the trucks to spray while stationary and also will not allow the trucks to spray if the truck is traveling over 20mph. If you are concerned that one of our drivers has missed your street or area, call our office, give us a date and time and we can look the spray mission up on our computer to confirm whether our driver executed their spray mission properly.

We would ask that when you see our trucks out spraying, please go inside for about 30 minutes. Our drivers are instructed to turn off the spray machine if people are standing by the road, walking, jogging, or bicycle riding towards them. They are instructed to travel approximately 100ft past the person or persons in proximity to the spray truck and then resume spraying. Although the products we use are safe to humans, pets, and plants when applied correctly, still they are pesticides and we do not recommend you run behind, play, or stand in the spray. Some of the products we use can be hazardous to some species of fish such as koi and goldfish if sprayed in direct proximity to them. For more information on spray truck policy and procedures, the pesticide products used, or to inquire about your area being sprayed or not, call our office at 225-214-5900. 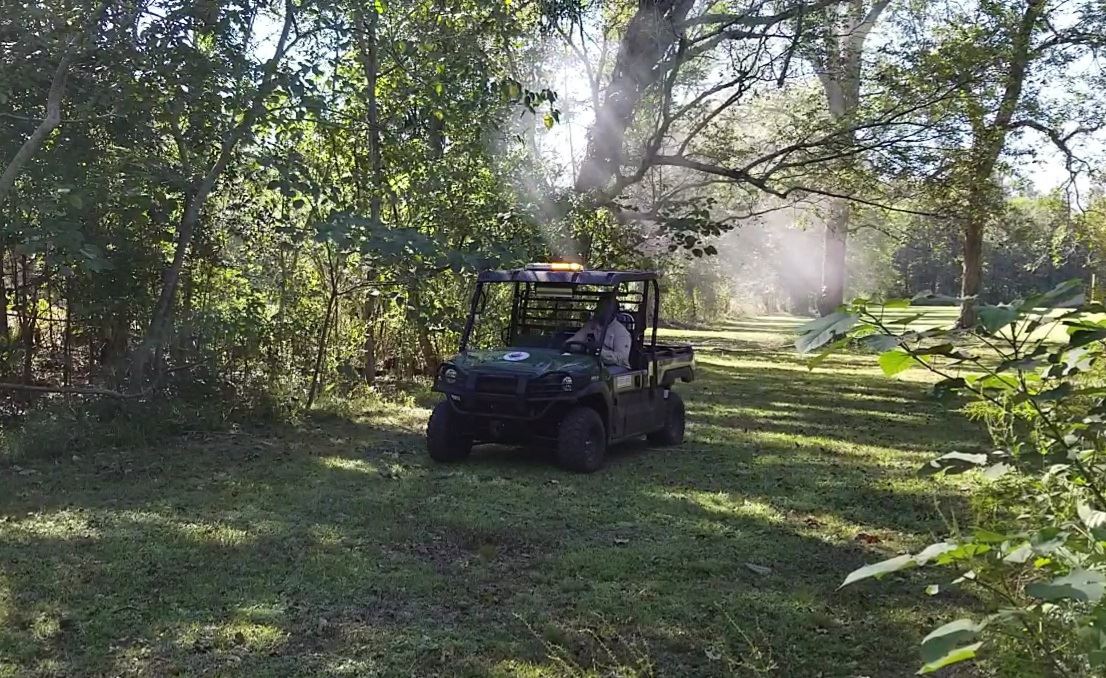 Off-road ULV spraying is accomplished by the use of our Kawasaki SXS vehicles. These vehicles allow us to access areas that we could not safely or easily take a spray truck into.

We often use these vehicles to treat areas such as parish parks, areas behind the levee system, parish schools, and any other area that needs to be treated where we cannot take a spray truck into. 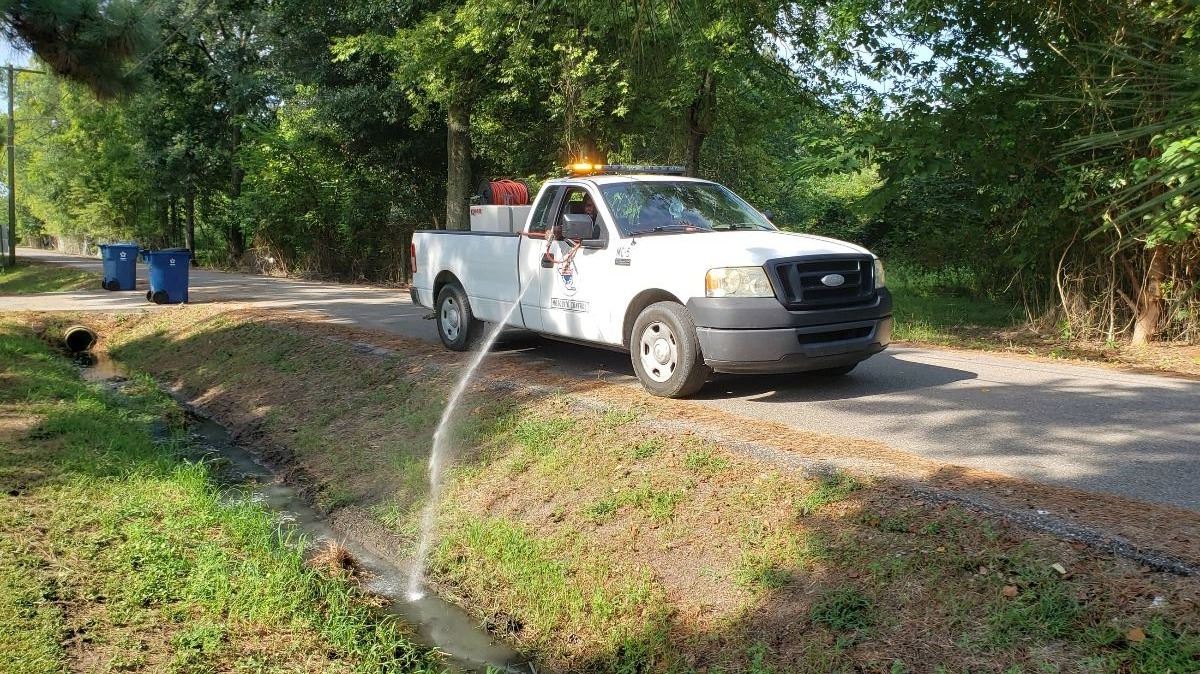 Larviciding by truck is used to treat any large areas of standing water and the many miles of sewer ditches in WBR Parish. Larviciding allows us to kill mosquitoes in the larval stage before they ever become an adult. Sewer ditches are the preferred habitat of the Southern House Mosquito (primary disease carrier in Louisiana), larviciding by truck allows us to gain even more control over this dangerous species.

The pesticide products we use to larvicide by truck are targeted to kill mosquito larvae and will not harm the other aquatic organisms living in the water. All of the larvicides we use here at WBR Mosquito Control are approved by The Environmental Protection Agency, The Louisiana Department of Agriculture and Forestry, and The Louisiana Department of Environmental Quality for the control of insect pests. Unlike adulticides, larvicides often have extended residuals (which means they can remain active for longer periods of time). Larvicide residuals can be anywhere from weeks to months depending on the product used and the weather conditions during and after application. Extended residual products allow us to effectively treat some areas by only having to apply those products a few times per season. 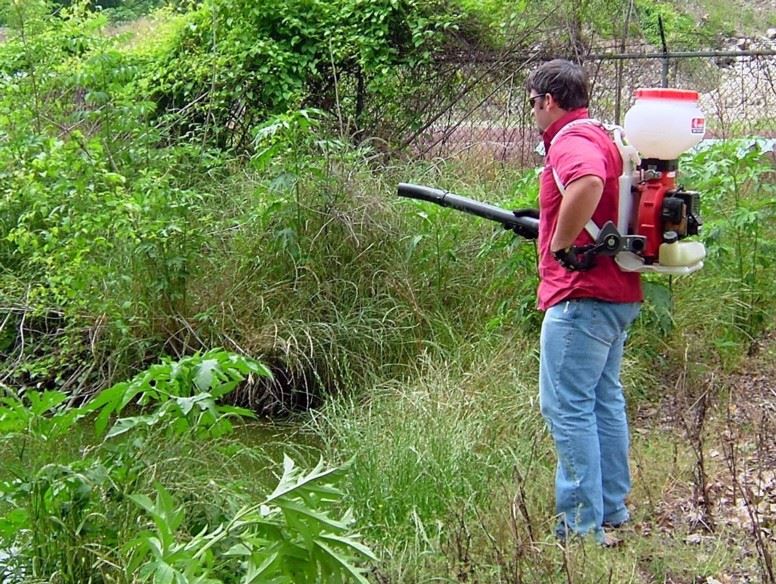 Larviciding by hand mainly consists of applying larvicide to areas where trucks and off-road vehicles cannot reach or areas that are too small to warrant the use of vehicle larviciding measures. These small areas or "hot spots" may be small in size but they are capable of and have produced vast amounts of larvae in the past. Consequently, these areas are monitored throughout the season for larval activity. We employ several methods for applying larvicide, from small portable spray tanks and backpack blowers to simply applying packets, briquettes, and granules by hand. 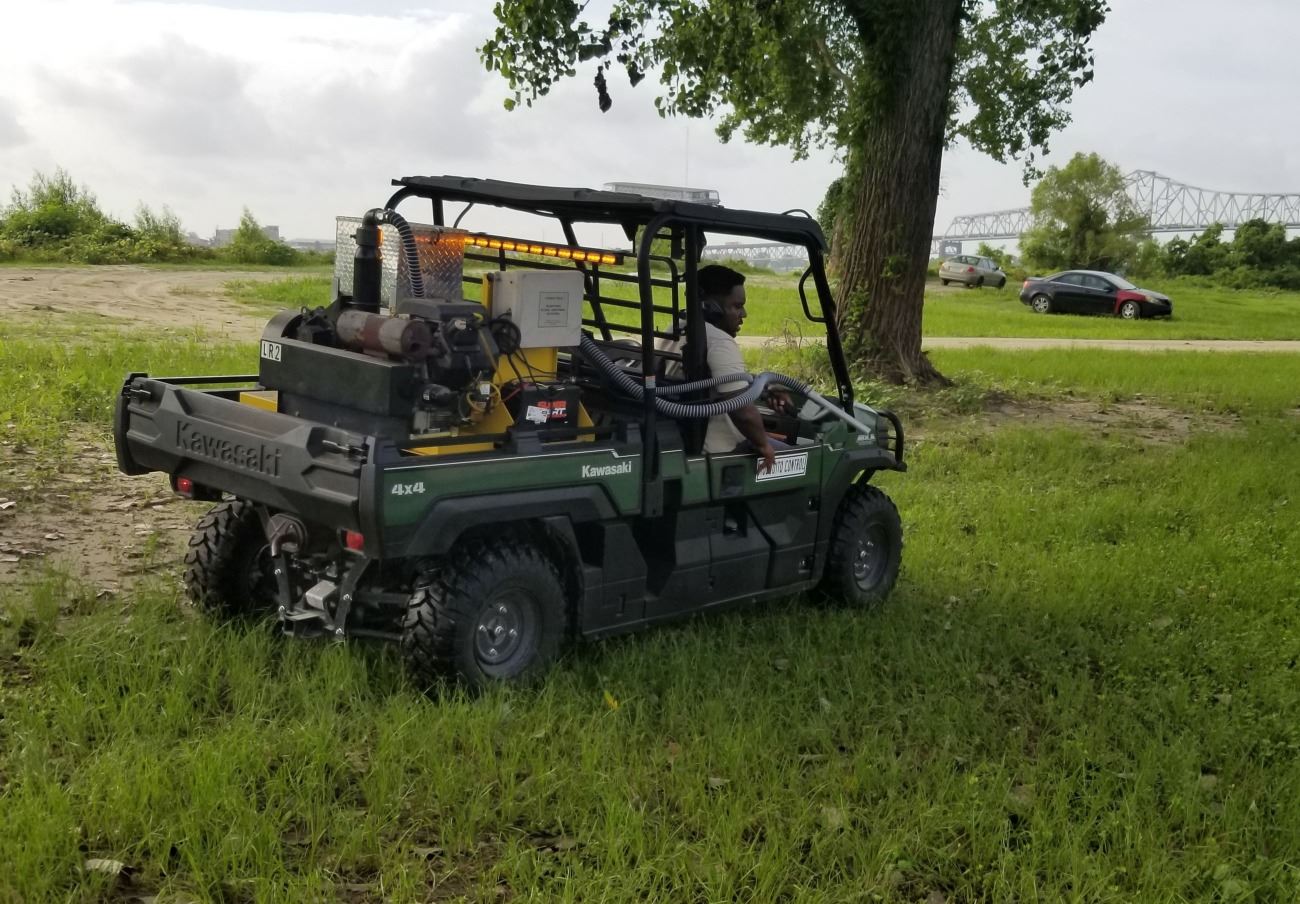 Off-road larviciding is accomplished by the use of our side-by-side off-road vehicles. These vehicles allow us access to bodies of standing water, ditches, and canals that we would not be able to reach with a truck. We have two types of larviciding equipment that go into these vehicles, one that applies liquid larvicide and one that is designed to disperse granular larvicide. These machines and vehicles are especially useful when treating areas of water trapped behind the levee system. 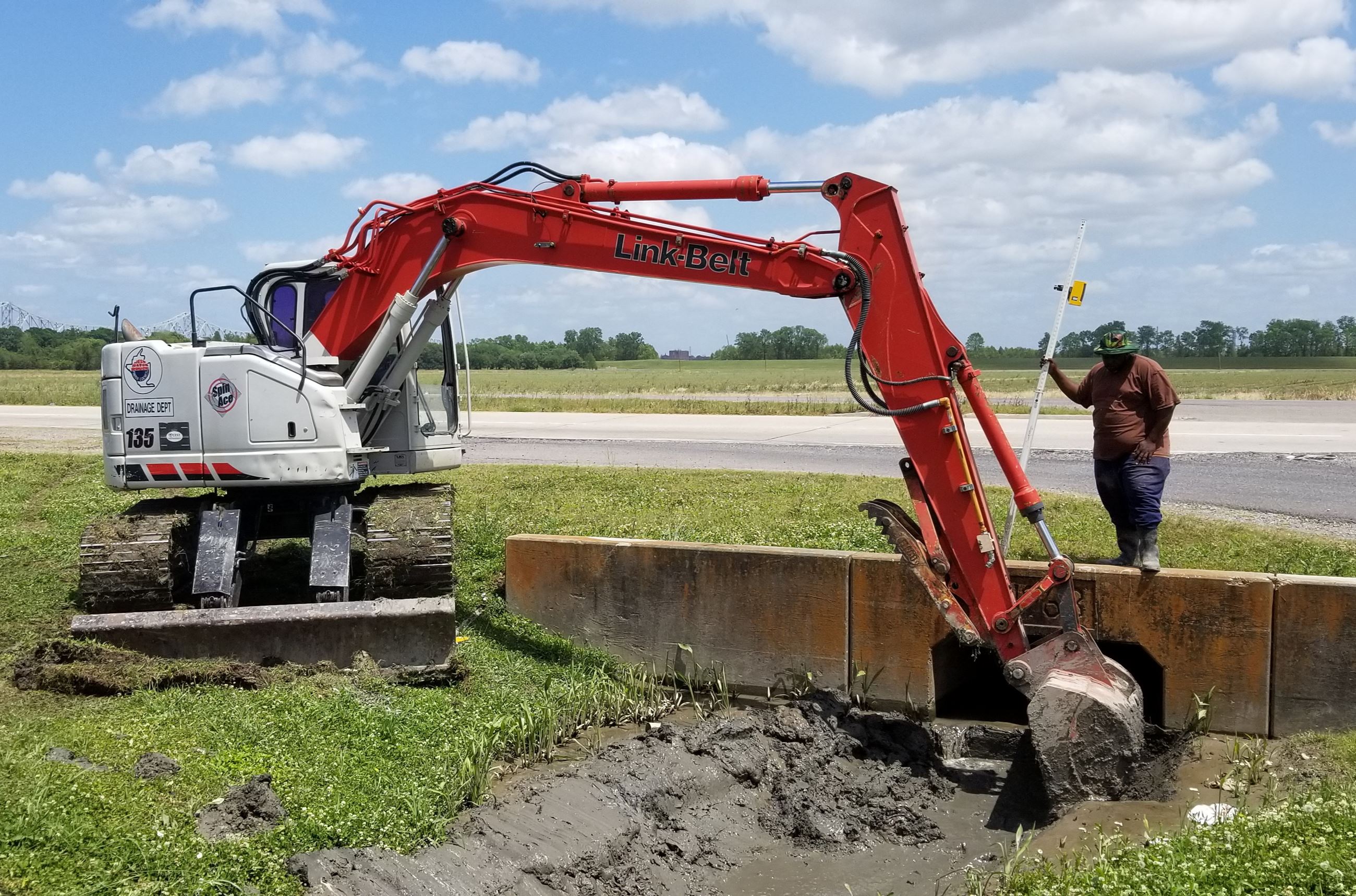 Source reduction in WBR Parish when and if it is needed is done with the help of either the WBR Drainage Department or The WBR Roads Department and the cooperation of their respective Superintendents, Dane Aucoin and John Andrae. Many thanks go to Dane and John and to their employees for their cooperative efforts to help us with mosquito problems related to drainage. The need for source reduction is seldom needed in WBR Parish thanks to the efforts of these two departments in providing WBR Parish with one of the best drainage systems in the state. 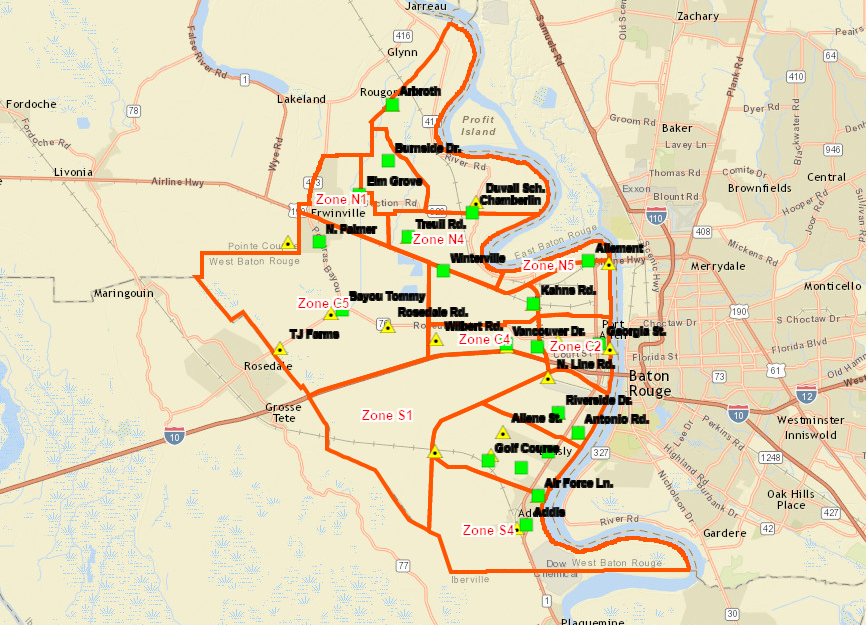 Gravid trap surveillance is key to our monitoring of mosquito populations and mosquito-borne disease levels in WBR Parish. Gravid traps are so named because they are designed to attract "gravid" (female mosquitoes that are full of eggs and consequently contain a blood meal) female mosquitoes. While they occasionally do collect other species of mosquitoes, gravid traps here in Louisiana are primarily used to catch Cx. Quinquefasciatus (the Southern House Mosquito). The Southern House Mosquito is the most prolific carrier of mosquito-borne disease in Louisiana consequently, the bulk of our surveillance operations are targeted towards this species.

We have twenty-one seasonal (March-November) gravid trap locations covering the entire parish from top to bottom. Our gravid trap collections are made twice per week and the collected mosquito samples are submitted every Wednesday to the LSU Disease Diagnostic Lab for disease testing. Disease testing results are reported back to us by Friday or over the weekend at the latest. 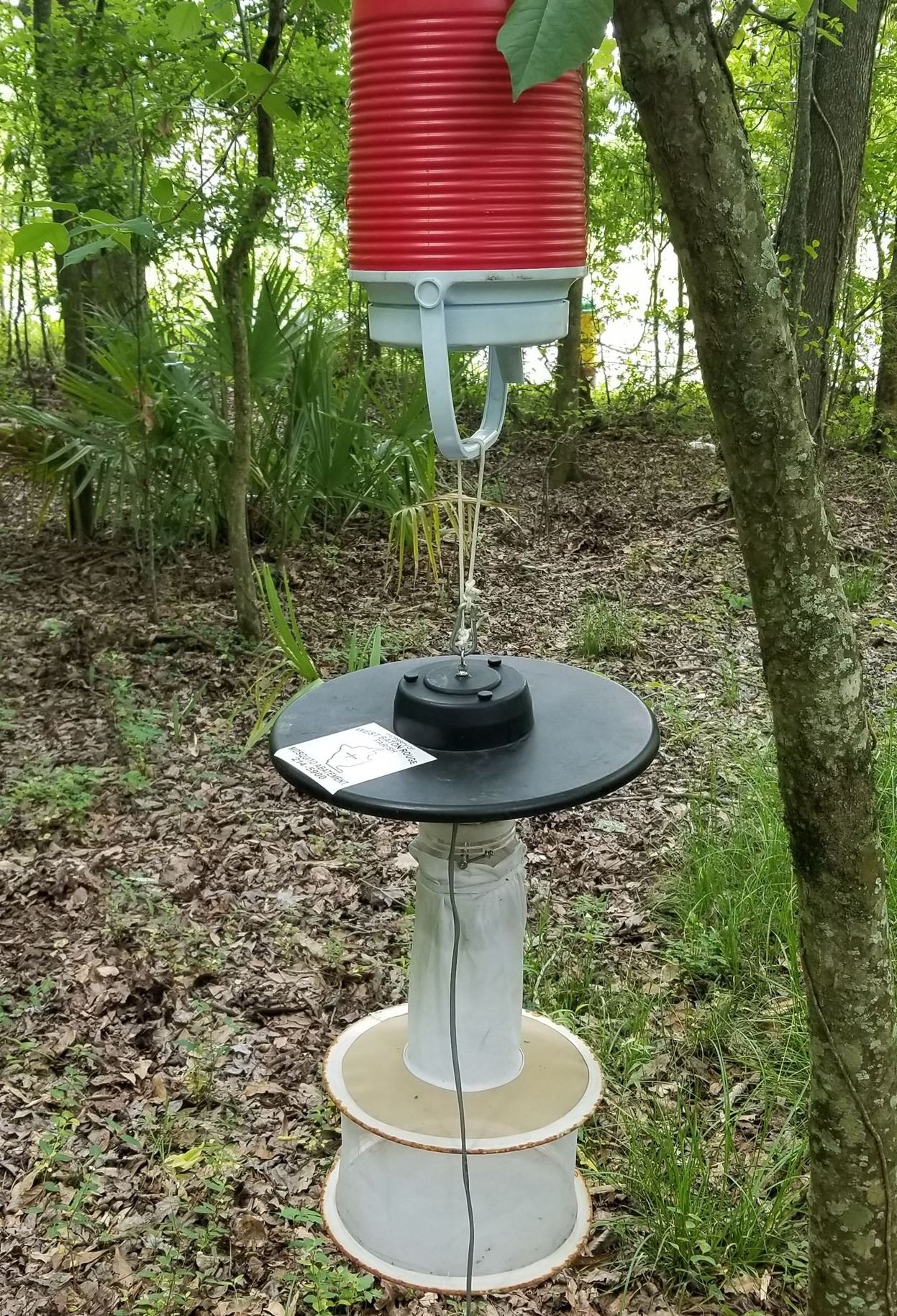 CDC (Centers for Disease Control) trap surveillance is another tool we use for the monitoring of mosquito populations and disease levels in the Parish. CDC traps are designed to catch various species of flood-water mosquitoes that can hatch out in very large numbers after periods of heavy rainfall such as the aftermath of tropical storm/hurricane events. These traps use a light source and a cooler filled with dry ice (flashes off carbon dioxide, many mosquitoes are heavily attracted to CO2) as attractants.

We have up to 21 GPS-marked trap sites that can be activated anytime after heavy rainfall to determine flood-water mosquito population numbers throughout WBR Parish. Traps are typically run overnight and collected the next morning. The trapped mosquitoes are then returned to the lab for counting and separation by sex and species. After counting, depending on the species, the mosquitoes are then placed into sample tubes and submitted to the LSU Disease Diagnostic Lab for testing. If a trap site tests positive for disease presence or if mosquito population numbers are above the threshold, the spray zone that the trap site is assigned to is scheduled to be sprayed during the week. 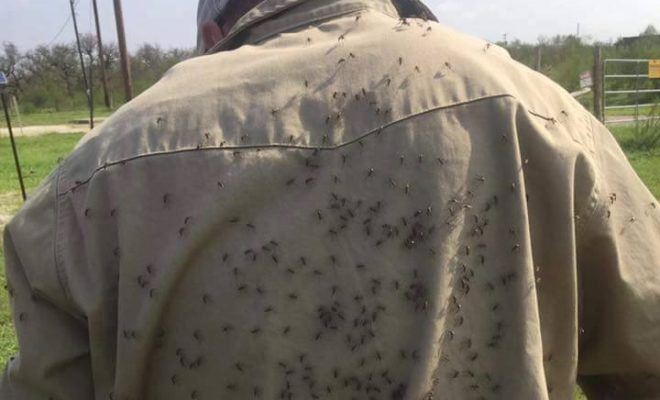 Mosquito landing rates are a quick and time-efficient way to gauge mosquito population numbers. The person taking the landing rate is using themselves as bait. Typically the idea is to determine how many mosquitoes land on an individual within one minute.

We take landing rates at numerous trap locations throughout the year, the results are then archived and compared to previous results at the same site. With over 16 years of archived mosquito surveillance data, including landing rates, we can use landing rate data to gauge mosquito population density in a given area. 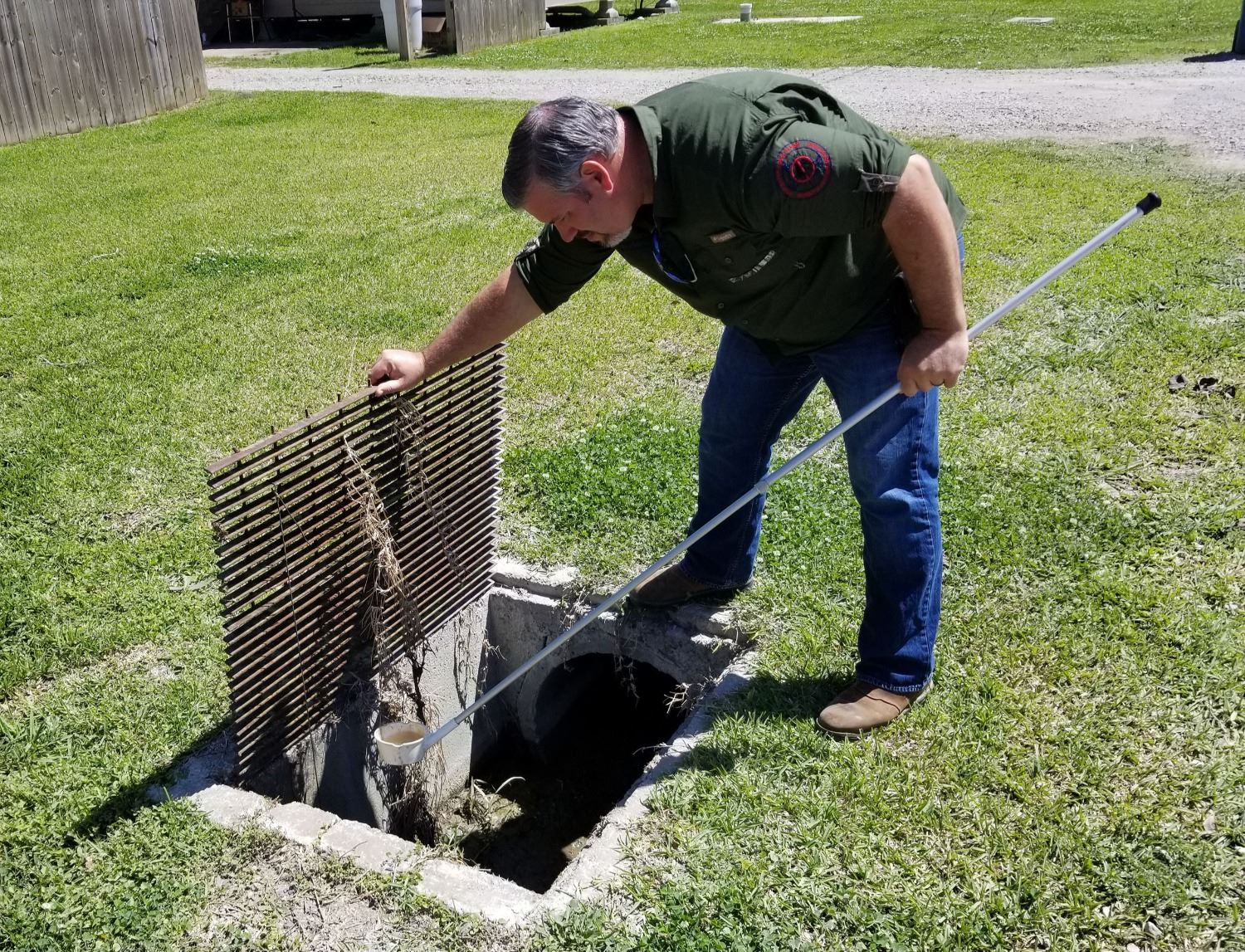 Dipping for mosquito larvae entails using a plastic cup (dipper) attached to a long pole to take a sample of water suspected to be breeding mosquito larvae. It is a way to quickly determine the likelihood of an impending hatch off of adult mosquitoes. The results are recorded as larvae present per dip and the instar (life stage) of the larvae is noted.

Part of our job at WBR Mosquito Control is to educate the public on why mosquito control is vitally important to a thriving community. We accomplish this by setting up education booths at local fairs and festivals, distributing educational print material, and making educational presentations at schools and public or departmental meetings.

This website and our presence on social media are also geared towards educating the public on what we do and what they can do to help control mosquitoes. If you are interested in having us set up a table at your event or having us make a presentation at your school, town meeting, or civic organization please contact our office at 225-214-5900, we would be glad to assist you. 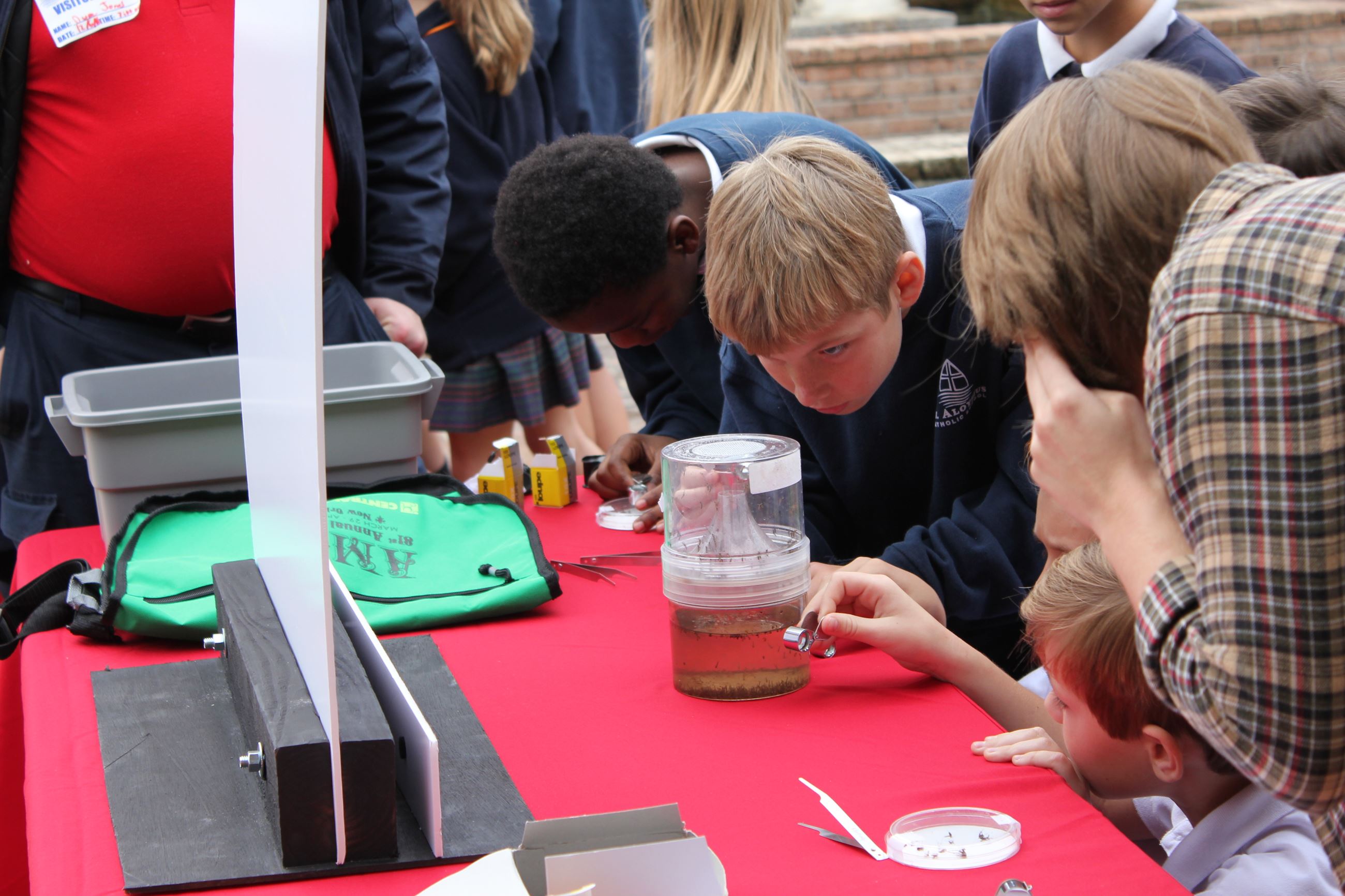 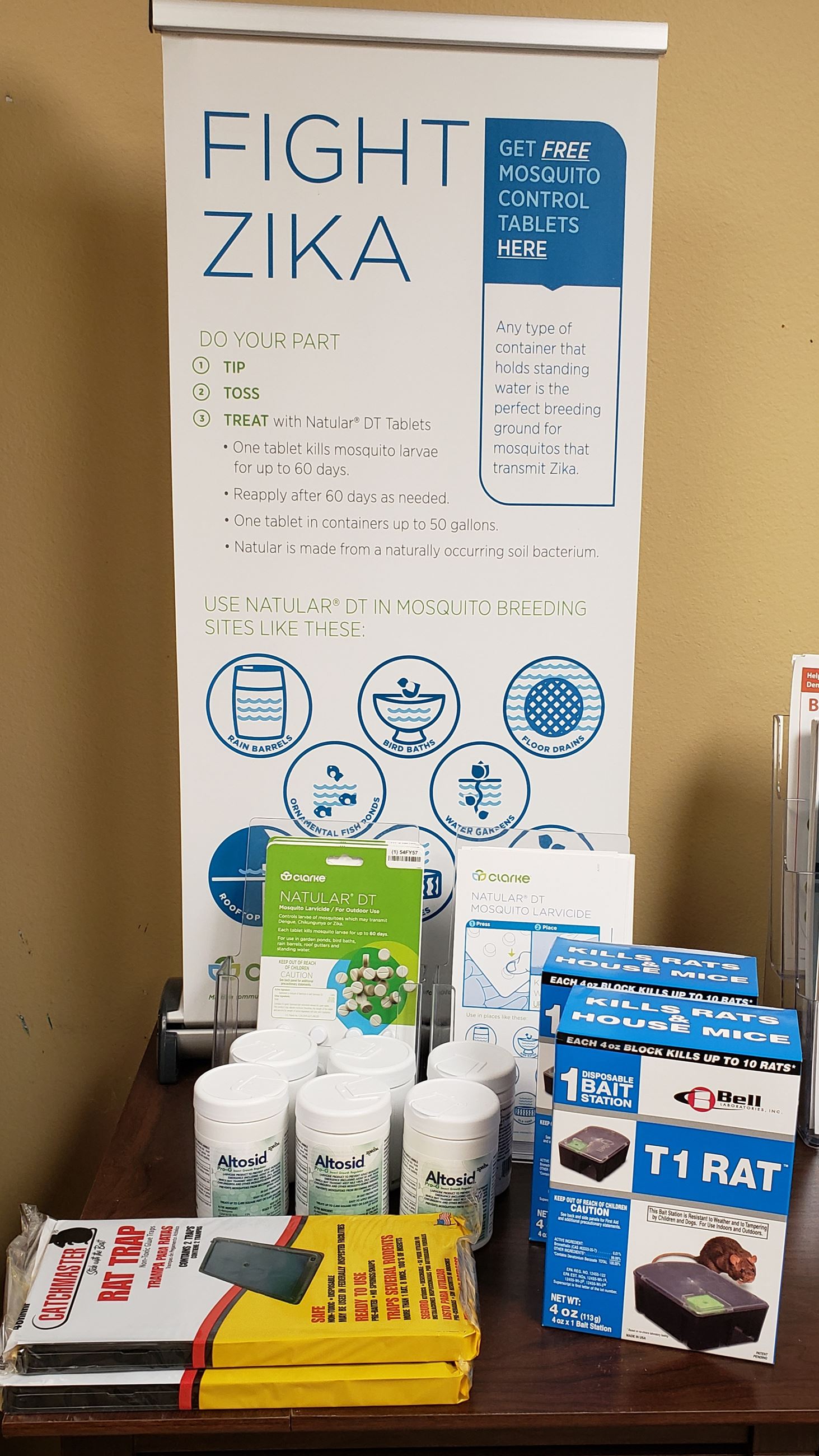 We have several pesticide products that we provide to parish residents free of charge. These products can be obtained by visiting our main office (3147 Ted Denstel Rd. Port Allen, LA 70767) during regular business hours. You will need to provide your name, address, and phone number for record purposes. Products are issued at 1 pack of each per residential address within WBR Parish. If you have any questions you can contact our office at 225-214-5900.